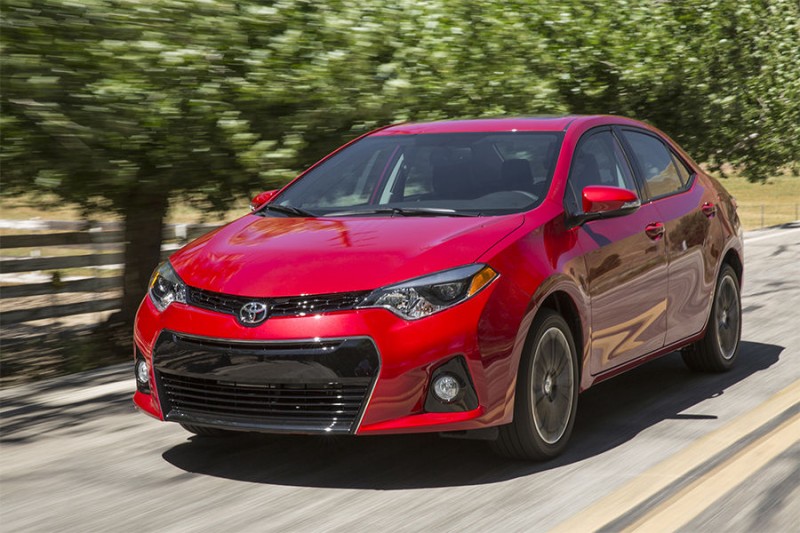 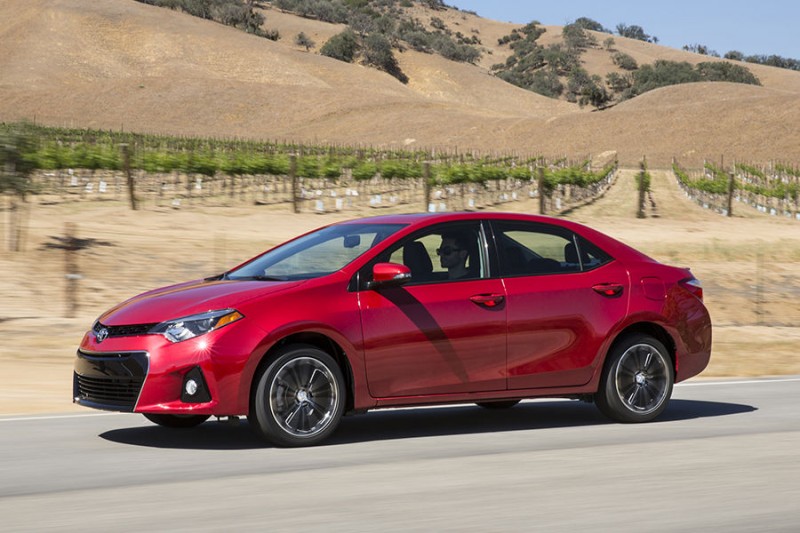 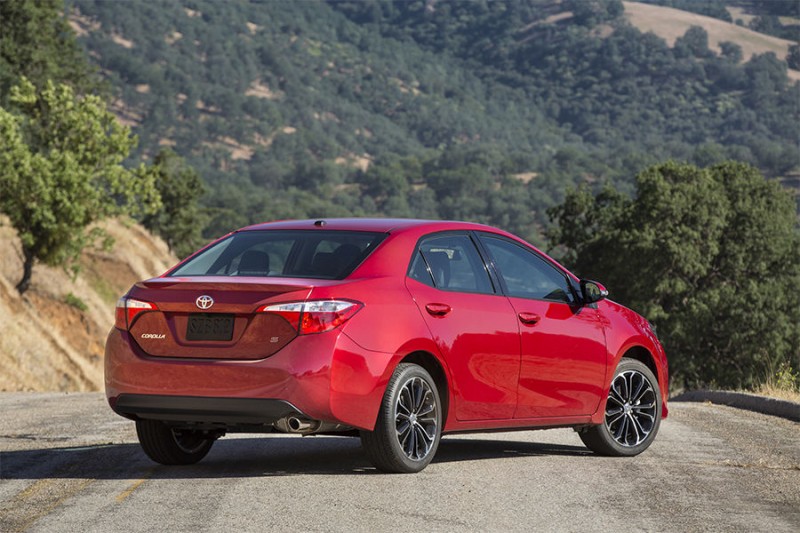 Largely unchanged, the 2016 Toyota Corolla gets updated Entune audio systems and an S Special Edition variant with a number of minor cosmetic upgrades.

The Toyota Corolla gets little respect from most car reviewers. It’s a soulless appliance, they’ll tell you; where’s the excitement and flair? But the Corolla is now in its 11th generation. It’s been on the market nonstop for almost half a century and ranks as the world’s best-selling small sedan. Toyota seems to know more than it gets credit for about its customers and their taste in cars, and the 2016 Corolla is bound to be yet another crowd-pleasing choice.

Many of the current Corolla’s strengths can be found inside. The overall design is fresh and brings, dare we say it, a stylish edge to the traditionally staid small sedan class. The interface for the infotainment system is easy to use thanks to clear displays and well-placed controls. We also like the Corolla’s rear seat that provides more legroom than many midsize sedans. Add the Corolla’s laudable crash-test scores, high fuel economy and exceptionally high resale value and you have all the ingredients for a car that pleases more than it dismays.

Just keep in mind that if you value driver engagement, those reviewers are right — the Corolla is hardly inspiring from behind the wheel. More dynamic alternatives include the sophisticated and similarly fuel-efficient Mazda 3and the frugal yet fun-to-drive Ford Focus Although the Hyundai Elantraisn’t that sporty, it offers ample style at an attractive price, and the always-popular Honda Civic and Volkswagen Jetta have been remade into strong all-around contenders. But the Toyota still earns a solid B rating. Other small cars may steal the headlines, but don’t let that distract you from the 2016 Corolla’s fundamental competence.

The 2016 Toyota Corolla is a five-passenger compact sedan available in four main trim levels: L, LE, LE Eco and S. All but the L are further offered in Plus and Premium sub-trims. There’s also a limited-production S Special Edition that slots in between the S Plus and Premium models.

The LE Plus adds 16-inch alloy wheels, foglights and eligibility for both an optional sunroof and the Driver Convenience package, which includes the sunroof and adds keyless entry and ignition, a roof-mounted antenna (versus the standard in-glass antenna) and the Entune Premium audio system with an integrated navigation system and Entune App Suite mobile-app integration.

Going with the LE Premium gets you the LE Plus model’s standard and optional features plus an eight-way power driver seat, heated front seats and Toyota’s SofTex premium vinyl upholstery.

The sport-themed S trim gets you the LE’s features plus unique wheel covers, a chrome grille frame, color-keyed mirrors with signal repeaters, a rear spoiler, a chrome exhaust tip, sport front seats, a leather-wrapped steering wheel with paddle shifters, a Sport driving mode for the CVT, sport instrumentation and a trip computer.

The S Plus upgrade provides 17-inch alloy wheels, firmer suspension tuning, rear disc brakes (versus the standard drums) and eligibility for the sunroof and Driver Convenience package. There’s also a six-speed manual transmission version of the S Plus that loses the paddle shifters (duh) but gets the Driver Convenience package as standard. The S Premium starts with the S Plus equipment and shares the upgrades of the other Premium models.

A limited-production S Special Edition, marking the Corolla’s 50th anniversary, starts with the standard equipment of the S Plus with the CVT and adds 17-inch alloys with a special gloss black finish, Special Edition badging, keyless entry and ignition and an all-black interior with red contrast stitching and red accents on the instrument panel. Despite its sporty theme, it won’t be available with a manual transmission. The sunroof and Entune Premium audio are stand-alone options on the S Special Edition.

The 2016 Toyota Corolla is powered by a 1.8-liter four-cylinder engine that comes in two versions. On every trim level except the LE Eco, it produces 132 horsepower and 128 pound-feet of torque. The LE Eco’s engine is a more efficient version with Toyota’s Valvematic variable value timing and also makes a little more power, checking in at 140 hp and 126 lb-ft of torque.

The base Corolla L comes standard with a six-speed manual transmission, offering a four-speed automatic as an option. The other trims feature a continuously variable transmission (CVT), although the S Plus can also be ordered with the six-speed manual.

In Edmunds performance testing, a Corolla LE Eco sauntered to 60 mph in 9.2 seconds, comparable to a CVT-equipped Honda Civic but nearly a full second behind the Mazda 3.

All 2016 Toyota Corollas come standard with stability and traction control and antilock brakes with brake assist. Also standard are front side airbags, front and rear side curtain airbags, a driver knee airbag and a passenger seat cushion airbag. A rearview camera is standard on all trims except the L.

Note that most 2016 Corollas get rear drum brakes, with only the S Plus, S Special Edition and S Premium trims upgrading to rear discs. In Edmunds brake testing, a Corolla LE Eco with the rear drums stopped from 60 mph in 130 feet, a longer-than-average result.

In government crash testing, the Corolla earned the top overall rating of five star, including five stars for frontal impacts and five stars for side impacts. The independent Insurance Institute for Highway Safety awarded the Corolla its top rating of”Good” in the moderate-overlap frontal-offset, side-impact and roof-strength tests. In the small-overlap frontal-offset test, though, the Corolla received the Institute’s second-lowest rating of “Marginal.” It also received a “Marginal” rating for ease-of-use of the child seat anchor system. Its seat and head restraint design was rated “Good” for whiplash protection in rear impacts. 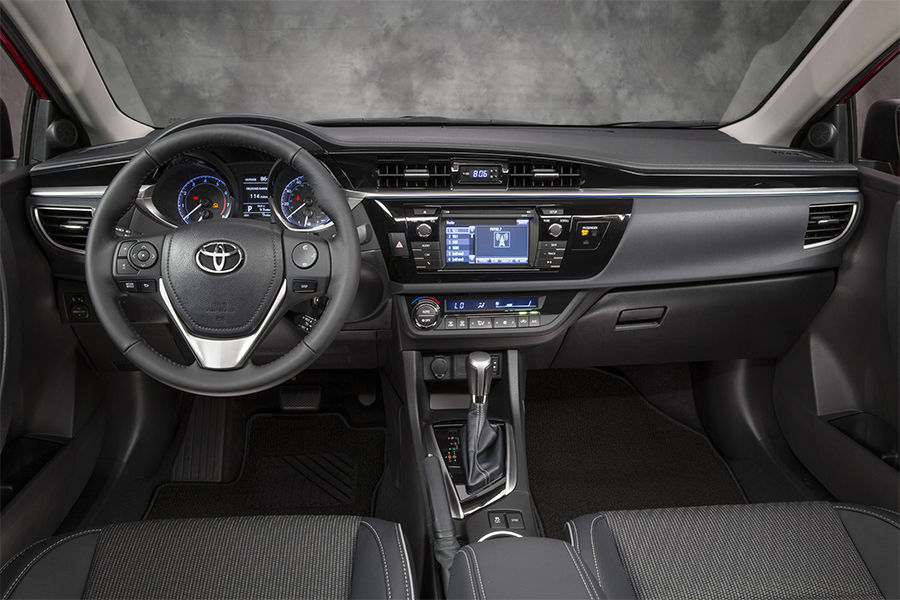 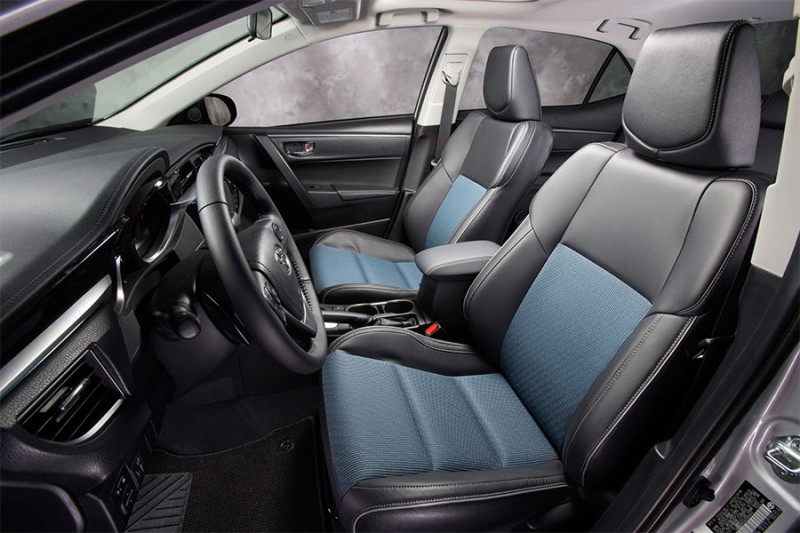 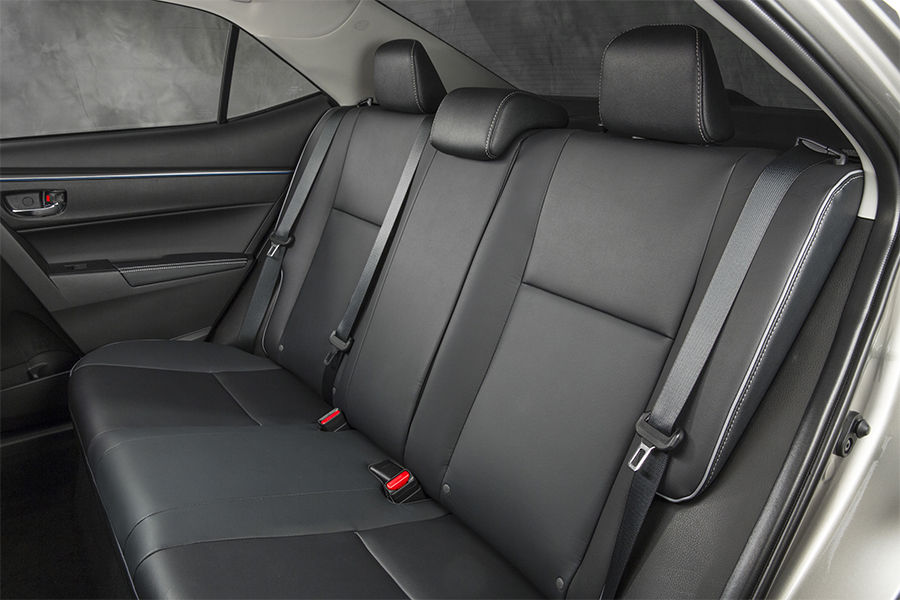 The Corolla’s cabin is easily the most interesting one to date. It’s clear that designers were given freer rein this time, and the result is a reasonably stylish dashboard, accented by un-Corolla-like flourishes such as a sportily contoured steering wheel and an eye-catching asymmetrical shifter surround. The top priority remains ease of use, so the various audio interfaces employ tried-and-true knobs for volume and tuning, while the LE-and-up automatic climate control system (a welcome luxury in this price bracket) provides a large knob and a few foolproof buttons.

Another pleasant surprise is the standard 6.1-inch touchscreen interface, which provides large virtual buttons and simple, clear graphics. The screen responds quickly to inputs, and its feature set is generous for an economy car offering. The available Entune App Suite integrates smartphone-connected services from Bing, Facebook, Yelp and Pandora, among others, as well as real-time traffic data and sports and stock information. Note that getting started with Entune App Suite requires you to install an app on your phone and register for an account.

The Corolla’s front seats provide generally adequate comfort, particularly the S trims’ better-bolstered chairs, though some may wish for more lumbar support. Also, longer-legged drivers could use more range from the telescoping steering wheel. Thanks in part to a 3.9-inch-longer wheelbase than the previous-generation Corolla, the current car offers considerably more rear legroom than most small sedans, if not a commensurate amount of headroom. The middle rear position is made more hospitable by the nearly flat floor, which lacks the traditional center “hump.” Trunk capacity is average at 13 cubic feet, but the wide trunk opening facilitates loading and unloading.

The 2016 Toyota Corolla delivers much the same driving experience as its predecessor. Partly, that’s down to Toyota’s tried-and-true but generally underwhelming 1.8-liter engine. Acceleration is adequate but nothing more. The LE Eco’s version gets some tweaks that add a few horsepower, but not enough to make a real difference. We do like the CVT, which has computer-simulated “shifts” to mitigate the typical CVT’s constant-rpm drone during acceleration. Skip the archaic four-speed automatic in the base L unless the price is simply too good to pass up.

The Corolla’s handling, too, is familiar. Sporty S-trim touches notwithstanding, there’s no playfulness to be found here; instead, attempts at enthusiastic driving in the twisties is met with lifeless steering and pronounced body roll. On the plus side, this is a car that’s all about no-hassle commuting comfort, with a quiet, compliant ride. If that describes your daily driving needs, the 2016 Corolla can make the daily grind seem less onerous.