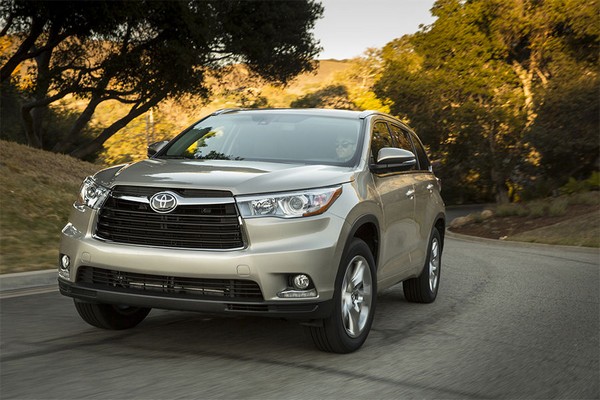 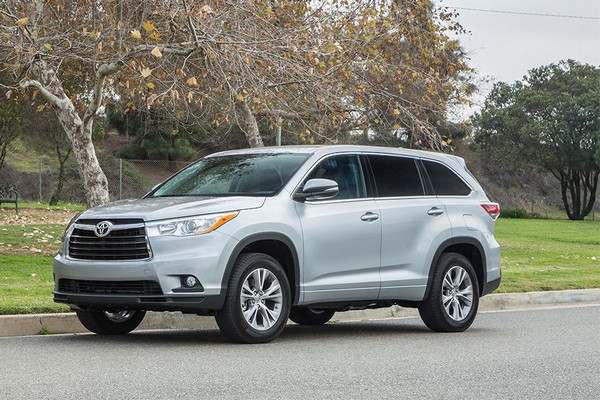 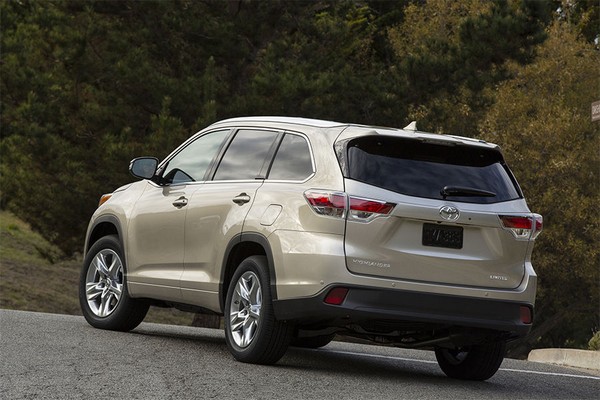 The 2016 Toyota Highlander is essentially unchanged from last year’s model. Minor upgrades include heated seats on the LE Plus trim level and a standard towing package on all V6 models.

The 2016 Toyota Highlander, which represents the third year of the model’s current generation, remains a top contender among family-friendly crossover SUVs. For buyers repelled by minivans or those that don’t need a V8-powered toy-hauling behemoth, the three-row Highlander hits the sweet spot, offering front- or all-wheel-drive, a choice of four-cylinder or V6 engines, and five distinct trim levels, each with a successively longer list of features.

Regardless of trim level, the Highlander stands out by virtue of its spacious and comfortable cabin. Second-row seating is a choice of three-across bench seating or captain’s chairs with a side table. The refined V6 and smooth six-speed automatic transmission deliver effortless acceleration and make the Highlander one of the quickest big crossovers around. There are also plenty of contemporary tech tools and smartphone-integrated services, anchored by an 8-inch high-resolution touchscreen display in the higher trim levels.

For 2016, Toyota keeps the Highlander essentially unchanged. There’s a new standard towing package that makes all V6 models capable of towing up to 5,000 pounds (Previously this was an option). LE Plus models now also get heated seats, good news for those in colder climes.

The Highlander packs enough goodness that we’ve made it one of our top picks for a three-row crossover this year. But it’s not the only model worth checking out. The Highlander’s main rival, the Honda Pilot, is fully redesigned this year and is more upscale and carlike than in prior years. The Ford Explorer is also updated this year and offers a similar range of prices and features plus a strong turbocharged V6 option. There’s also the handsome-looking Dodge Durango or the three-row Hyundai Santa Fe, the latter of which stacks up nicely against the Highlander across the board. All of them are competent family vehicles, but the Highlander certainly earns its well-deserved reputation for all-around goodness.

The 2016 Toyota Highlander is a three-row midsize crossover offered in LE, LE Plus, XLE, Limited and Limited Platinum trim levels. Eight-passenger seating is standard on the LE, LE Plus and XLE, while seven-passenger seating (featuring second-row captain’s chairs instead of a three-person bench) is optional on the XLE and standard on the Limited and Limited Platinum. Note that the related Highlander Hybrid is reviewed separately.

There are no factory options available for the LE or LE Plus trim levels. The XLE can be outfitted with the second-row captain’s chairs. An optional rear-seat entertainment package for the XLE and Limited includes a Blu-ray player with 9-inch display, RCA jacks and wireless headphones.

Finally, the top-shelf Highlander Limited Platinum reaps all of the above as standard and further includes a panoramic sunroof, rain-sensing wipers, a heated steering wheel and heated second-row seats.

The base Highlander LE comes standard with front-wheel drive and a 2.7-liter four-cylinder engine rated at 185 horsepower and 184 pound-feet of torque. The only transmission is a six-speed automatic. Fuel economy is an EPA-estimated 22 mpg combined (20 mpg city/25 mpg highway), which is barely better than the ratings for the stronger V6 engine.

That 3.5-liter V6 is optional on the LE and standard on all other trims. It’s rated at 270 hp and 248 lb-ft of torque. The transmission is again a six-speed automatic and either front- or all-wheel drive is available (Limited Platinum comes with standard AWD). The front-wheel-drive V6 configuration achieves an EPA-estimated 21 mpg combined (19 mpg city/25 mpg highway), while the AWD V6 drops a tick to 20 mpg combined (18 mpg city/24 mpg highway). We easily met these estimates when we recorded a real-world 23 mpg on Edmunds’ 120-mile mixed-driving evaluation loop in an XLE AWD.

At the Edmunds test facility, we recorded a 7.3-second 0-60-mph time in that same XLE AWD, which is about a second quicker than the average for this segment. A Limited with front-wheel drive still outpaced most competitors with a run to 60 mph in 7.6 seconds.

In a simulated panic stop from 60 mph conducted at the Edmunds test facility, a Highlander XLE AWD managed a braking distance of 116 feet, a very good distance for this class. 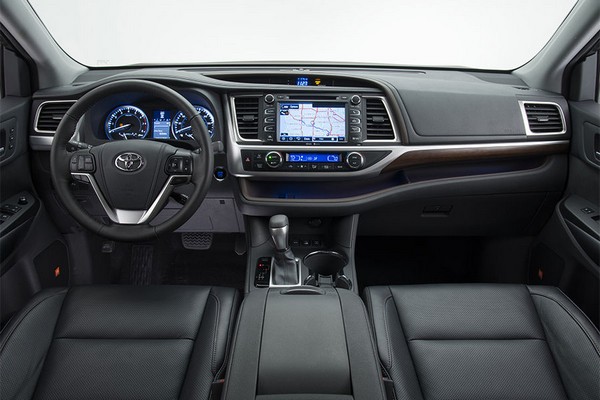 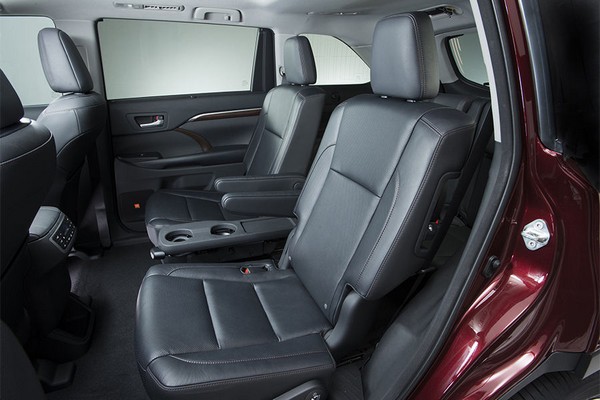 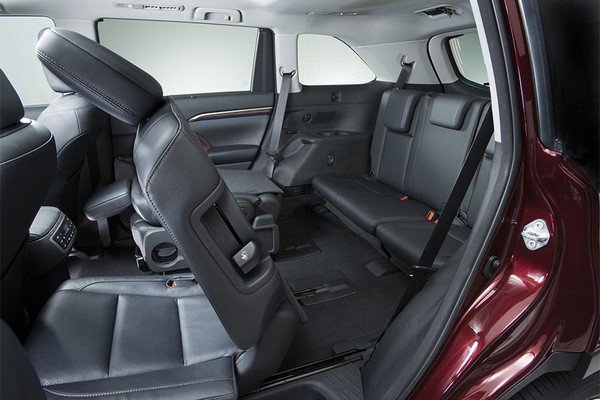 Hard plastics that were once the bane of the Highlander have since been supplanted by supple surfaces with fancy stitching at the seams. The gauge cluster has a contemporary look thanks in part to the multifunction information display that sits in the middle (especially the XLE and Limited’s larger color version). Although the base 6.1-inch central touchscreen is a bit basic in both form and function, the available 8-inch unit is more satisfying with its improved graphics and functionality.

Toyota has baked a number of handy storage features into the Highlander’s interior. There’s a unique built-in shelf on the dashboard, for instance, that can serve as a resting place for phones and other small personal items. The shelf’s short height, however, can make it hard to fit your hand in there to place or retrieve those items. Vastly more spacious is the storage box under the console armrest that’s big enough for a large purse.

If you’re expecting big-time space in the way back, we should warn you that adults will still find the third row cramped relative to some rivals. Kids will be fine, though, and the three-across seating bolsters the Highlander’s credentials as a minivan substitute. Behind that third row is nearly 14 cubic feet of cargo-carrying capacity, which when the rear seats are lowered maxes out at 83.7 cubic feet, an average figure for this class of vehicle. The available height-adjustable power liftgate with memory height settings is also a boon in garages with low ceilings.

Most 2016 Toyota Highlander buyers end up with the tried-and-true V6 engine, and it’s easy to see why: You get almost the same fuel economy as with the base four-cylinder, along with an extra 85 hp and some of the smoothest acceleration in any crossover at this price. The six-speed automatic transmission works well and provides quick downshifts in most situations.

The meaty three-spoke steering wheel is precise, and if you drive quickly around a tight turn, the Highlander remains secure, with a decent amount of grip. As long as you’re not looking for athletic handling (not many people are in this class, honestly), you’ll likely find the Highlander sharp enough. Of course, the Highlander’s bread and butter is ferrying passengers around in comfort, and it certainly excels in that regard. The cabin remains hushed at speed, and road impacts are generally shrugged off by the compliant suspension, though the Limited’s 19-inch wheels make it feel slightly less accommodating.