Car owners who want to upgrade their vehicles can do so with a few modifications to the engine.. One of these modifications involves adding a dual exhaust system. There are a number of benefits to using dual exhaust on a car or truck.. The main benefit is increasing the amount of gas exhaust that is pulled away from the engine, allowing more fresh air to enter the system. This gives the engine more oxygen to create combustion of the fuel that flows into its pistons.

Increased ability to combust fuel means that the engine is going to have more power, better fuel efficiency, and reach higher speeds that much faster. Owners can also use their dual exhaust systems to reduce pollution, improve longevity of their cars and also create a certain aesthetic look on their vehicle. Dual exhaust systems can be found through car mechanics, car part stores, manufacturer websites, and on auction sites, like eBay Motors. 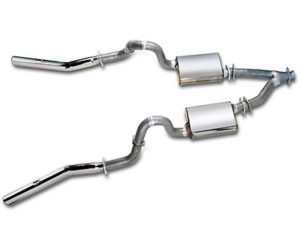 An exhaust system is a set of pipes that carry engine exhaust away from the engine, and presumably, disperse it into the outside atmosphere. An exhaust system can consist of just one pipe to direct this gas away from the engine, but there are also dual exhausts that consist of two pipes. These dual exhaust systems are used for a number of purposes, and may also be connected to other pieces of technology within the car. A car exhaust system can be connected to a cylinder head and exhaust manifold, a turbocharger, a catalytic converter, and/or a muffler. These parts each perform different jobs in a car. For instance, catalytic converters reduce air pollution by converting toxic substances in gas exhaust into less toxic forms.

In a car, the exhaust usually exits out of the back of the vehicle through the muffler, which is a noise suppression device, to help quiet sounds of the engine traveling through exhaust pipes. With a dual exhaust, there are a number of pipe configurations, some systems place two pipes next to one another, have them placed separately on either side of the rear of the vehicle, or both pipes enter a single muffler.

A dual exhaust system helps improve engine efficiency and overall performance of the vehicle by filtering even more exhaust gases away from the engine than a single exhaust pipe. This helps increase an engine’s horsepower because the engine doesn’t have to put as much effort into pushing exhaust gases out of it to bring in more oxygen from an intake valve. By definition, horsepower is how much work the car engine can do within a certain period of time. The average car has about 222 horsepower, but adding dual exhaust can increase horsepower by as much as 167 percent. The percentage increase really depends on the type of engine, the equipment attached to the exhaust system, and the diameter of the exhaust piping.

The wider the pipe, the more gas can flow out of the engine and the better the horsepower of the vehicle. However, make the pipe too wide and the overall engine performance goes down because you are sacrificing engine compression, again making the engine work harder to get gas exhaust out. Here is a chart showing the recommended pipe diameters for the maximum amount of horsepower to engine size.

The “CID” in engine size in this chart refers to the amount of volume displaced by the engine piston in one single movement. CID is short for cubic inch displacement.

Car owners will find a number of benefits in dual exhaust systems. Making one easy change to the internal system of a car provides many improvements in performance, sound quality, reduction in pollution, and also an increase in longevity. Additionally, there are a lot of different options to choose from in a dual exhaust system.

Setting up a dual exhaust on a vehicle can help increase engine efficiency and horsepower. This will increase the amount of towing force a vehicle can bring to bear. It can also decrease the lag time many vehicles experience in getting to high speeds on the road. With the dual exhaust quickly funneling burnt gases away from the engine, more oxygen can be brought in, allowing the engine to reach peak performance in seconds.

Besides the obvious gain in horsepower and engine efficiency, a vehicle with a dual exhaust typically features that low, booming sound that is normally relegated to muscle cars. This can instantly turn the vehicle into a head-turner when traveling down the road. Some local authorities have noise ordinances that drivers must be wary of, but with the customization options available, including the type of muffler chosen, drivers are sure the find the perfect balance between legality and coolness.

Setting up a dual exhaust will also reduce strain on the engine, because the engine won’t have to work as hard to push gases out and bring fresh air in. This also increases the fuel economy of an engine by allowing it to make better use of power and produce more energy overall.

Setting up a dual exhaust system can help keep the engine cool as well. The constant flow of fresh air over the engine from outside helps keep the temperature down while the dual exhaust pulls hot gases away from the engine that much faster. It has also been found that the engines in dual exhaust cars last longer, which means car owners can stay on the road for many more years.

There are a number of different exhaust systems car owners can install in their vehicles. Each system offers its own benefits, from being easy to install to increasing engine performance and efficiency.

Similar to a standard single exhaust system, the dual rear exit just doubles the number of pipes with two exit pipes. These exit pipes can be placed next to one another or spaced apart near the rear of the vehicle. The diameter of the pipe is varied to increase or decrease the engine sound.

The opposite dual exhaust system is a great option for making any vehicle sound more powerful and giving the impression of a bigger engine under the hood. These systems are composed of two fixed pipes placed separately under either side of the rear bumper. The pipes bend at a 90-degree angle but do not wrap around the wheel as with a single exhaust pipe. Opposite dual exhaust pipes are also more efficient.