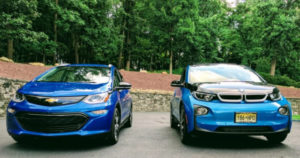 Owners of specific electric cars sometimes tend to become boosters and fans for their particular EV as well as plugging in to drive in general.

So it was with Tom Moloughney, whose purchase of the very first 2014 BMW i3 REx range-extended electric car in the U.S. he wrote about for us three years ago.

That car was regrettably totaled in an accident this year, and i3 enthusiast Moloughney is temporarily without a car that plugs in.
He’s relatively well-known among electric-car advocates, however, and someone within GM had the smart idea of loaning him a Chevrolet Bolt EV.

Driving Chevy’s 238-mile electric hatchback would let him get familiar with the first affordable 200-plus-mile electric car on the market while he mulled over his next purchase.

(He’s on the list for a Tesla Model 3 but isn’t a current Tesla owner, so that and his New Jersey location mean he doesn’t expect to take delivery for most of a year or longer.)
Moloughney wrote up his experiences with the Bolt EV in an extended test-drive review on InsideEVs, looking at its pros and cons through the eyes of an i3 driver who’d put more than 70,000 miles on his 2014 BMW electric car.

In his six days with a blue Bolt EV Premier, he put 800 miles on the odometer on a variety of routes and driving uses.
Among his conclusions:
•The Bolt EV is powerful, but its front-wheel drive lets some torque steer come through on hard acceleration, whereas the rear-wheel-drive BMW i3 didn’t drive that way.
•Like a number of test drivers, Moloughney found the front seats somewhat uncomfortable, though his wife was fine with them. Bolt EV seat comfort appears highly individual, perhaps more so than in other cars. 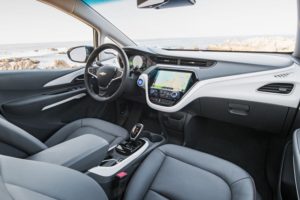 •Tom gave high marks to the Bolt EV’s center display and console, especially its infographics and the display of various vehicle operating and charging information
•Interior materials were another story: “too much shiny plastic” against the BMW’s more muted, almost Scandinavian decor, with optional wood trim
•The Bolt EV wins decisively over the i3 on rear seating and access to it
Moloughney has written several times for Green Car Reports, and is hugely knowledgeable about electric cars in general.

He puts a lot of miles on his cars, and probably serves as a good early-production test driver. He’s opinionated but, hey, he’s from Jersey.

We recommend reading the entire review for an informed perspective on how a high-end Bolt EV stacks up against Tom’s beloved i3 REx.