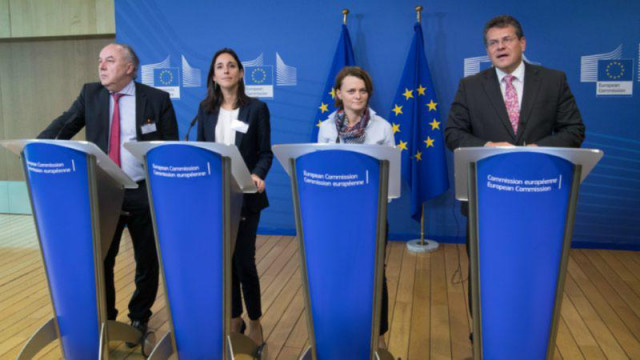 As it stands today, Asia dominates the production of electric-car battery cells globally, with Japanese and Korean companies representing the bulk of the industry outside of booming Chinese makers.

Europe, however, lacks a single major player in the fabrication and assembly of lithium-ion battery cells for cars that plug in.

Now European leaders aim to change that, through an alliance that would build battery cells for future vehicle and technology applications.
Battery cells are essentially the building block for electric cars, and Maroš Šefčovic, EU Commission vice president in charge of the Energy Union, said Europe must act quickly to ensure its competitiveness.

“The lack of a domestic, European cell manufacturing base jeopardizes the position of EU industrial customers,” he said, according to Euractiv, “because of the security of the supply chain, increased costs due to transportation, time delays, weaker quality control or limitations on the design.”

Europe’s future battery cell business is especially important as many European nations make plans to phase out the internal-combustion engine over the next two decades.
France, Norway, Holland, and the United Kingdom have all named target dates to ban the sale of new vehicles powered by fossil fuels.

Executives from both the automotive and chemical industries, along with engineers, joined the summit held 10 days ago, at which Šefčovic declared the work starts “immediately.”

Following the gathering, the vice president of the Energy Union announced a number of working groups on issues ranging from the supply chain, investment financing, trade issues, and R&D.
Once the working groups meet and discuss the various topics, they will issue a roadmap for Europe’s battery cell industry.

The battery alliance could adopt a strategic plan as early as February 2018.

Not only will the alliance be a critical part of Europe’s future economic situation, but it will ensure European companies—and more importantly, automakers—have enough battery cells and raw materials.

Analysts expect the market for electric cars to boom in the coming decades, and Volkswagen specifically previously said it needs 40 gigafactories worth of batteries for its electric car plans
That’s more than 200 gigawatt-hours worth of battery cells, and VW won’t be the only automaker competing for the supplies.

The global market for batteries could reach $300 million by 2025, and the EU expressed support for its domestic battery industry with a potential $2.6 million investment.