How An Engine Cooling System Works 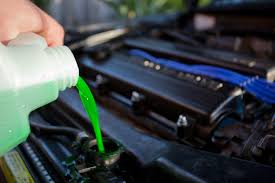 A water-cooled engine block and cylinder head have interconnected coolant channels running through them. At the top of the cylinder head all the channels converge toa single outlet.

A pump, driven by a pulley and belt from the crankshaft, drives hot coolant out of the engine to the radiator, which is a form of heat exchanger.

Unwanted heat is passed from the radiator into the air stream, and the cooled liquid then returns to an inlet at the bottom of the block and flows back into the channels again.

Usually the pump sends coolant up through the engine and down through the radiator, taking advantage of the fact that hot water expands, becomes lighter and rises above cool water when heated. Its natural tendency is to flow upwards, and the pump assists circulation.

The radiator is linked to the engine by rubber hoses, and has a top and bottom tank connected by a core a bank of many fine tubes.

The tubes pass through holes in a stack of thin sheet-metal fins, so that the core has a very large surface area and can lose heat rapidly to the cooler air passing through it.

On older cars the tubes run vertically, but modern, low-fronted cars have crossflow radiators with tubes that run from side to side.

In an engine at its ordinary working temperature, the coolant is only just below normal boiling point.

The risk of boiling is avoided by increasing the pressure in the system, which raises the boiling point.

The extra pressure is limited by the radiator cap, which has a pressure valve in it. Excessive pressure opens the valve, and coolant flows out through an overflow pipe.

In a cooling system of this type there is a continual slight loss of coolant if the engine runs very hot. The system needs topping up from time to time.

Later cars have a sealed system in which any overflow goes into an expansion tank, from which it is sucked back into the engine when the remaining liquid cools.

The radiator needs a constant flow of air through its core to cool it adequately. When the car is moving, this happens anyway; but when it is stationary a fan is used to help the airflow.

The fan may be driven by the engine, but unless the engine is working hard, it is not always needed while the car is moving, so the energy used in driving it wastes fuel.