How to Bleed Your Brakes the Right Way 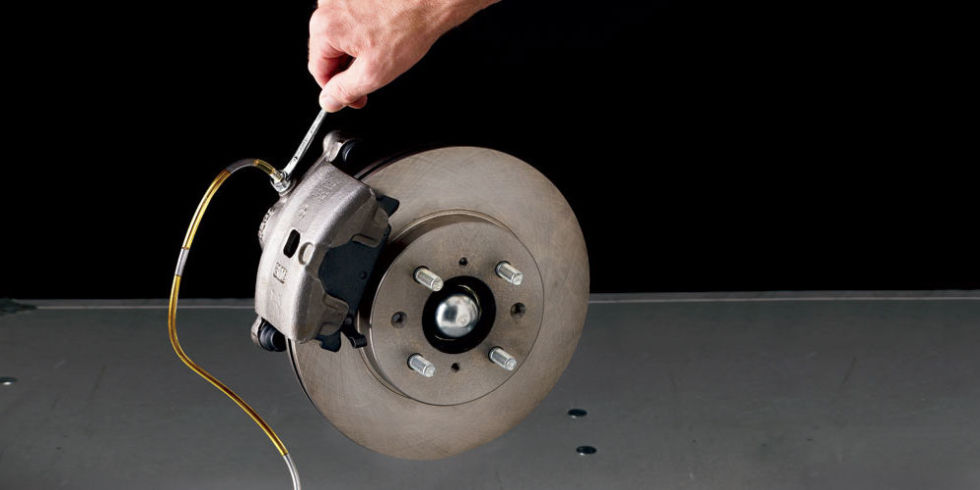 Your elderly car has required little in the way of episodic repair, for which you’re glad. But at your last scheduled maintenance, the service manager advised you that you would need to replace the brake pads, front and rear, before too long. But deferring that expense for a while wouldn’t be a problem, he said.

And all was fine for a couple of months, until you noticed the brake pedal dipping a little too close to the carpet while sitting at traffic lights. Not a big problem. Replacing the pads yourself on a Saturday morning should do the trick.

Except that now, despite the new pads all around, the brake pedal still feels spongy and low. You need to bleed your brakes.

Here’s what happened. The pads wore so thin that the brake fluid level dropped too low in the master cylinder reservoir. An air bubble or three got pumped into the lines. And because air is compressible, you now have the equivalent of a very soft spring in the solid column of brake fluid between your foot and the wheels. Bleeding the brakes will flush that air out.

The job also involves replacing the old fluid with fresh, which is a good thing. Why would the fluid need to be replaced? It becomes contaminated with atmospheric dirt and abrasive metal wear particles from moving parts in the master cylinder and calipers. It absorbs moisture from the air, which can lower the boiling point of the fluid enough to make it boil at the end of a long downhill grade. (And steam, like air, is compressible.) High temperatures from those high-energy-dissipation stops can degrade the alcohol-based fluid itself. Eventually, your water-clear brake fluid starts to look more like squid ink.

Antilock braking systems are even less tolerant of contaminated fluid and air than non-ABS. The ABS hydraulic pump operates at several thousand psi, forcing brake fluid through very small valves. This can whip air and brake fluid into something like the foam on a latte, which makes bleeding difficult. Those same valves and pump can easily be damaged by tiny abrasive particles.

The good news: Air that has entered the ABS controller can be bled out. Bad news: Some vehicles require the use of a hideously expensive proprietary ABS scan tool to cycle the pump and valves to purge the last of the air. But there’s a simple solution to that: Never let any air enter the system. You can flush a system with fresh fluid by using nothing more than a wrench that fits the bleeder bolts — and a helper with a normal attention span.

To properly bleed the brakes, start with a couple of 8-ounce cans of fresh brake fluid. An unopened can has a long shelf life. An opened can should be discarded within a few weeks. Get the vehicle up in the air and remove all four wheels. Well, okay, you might be able to do this with the wheels on if you can swing a wrench on the bleeder valves. 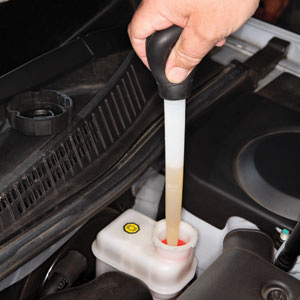 Suck the old fluid and sediment out of the master cylinder reservoir with a turkey baster or syringe.

Top off the reservoir with fresh fluid regularly as you bleed the system. Don’t let it get more than half empty.

So, your next task is to make sure the bleeder valves can be loosened. You’ll need a box wrench that fits the bleeder bolt. A crescent wrench or Vise-Grip probably will just round off the bolt’s flats. A little penetrating oil drizzled on the bolts the day before will help. So will some judicious tapping with a hammer to break up any corrosion. Loosen the bolts, but leave them closed.

If you can’t turn the bleeders without breaking them off, you’ll need to replace the brake calipers or wheel cylinders. See the above notation about penetrating oil and light hammer taps before applying enough torque to break these minuscule, hollow bolts.

Sneak into the kitchen and appropriate the small turkey baster. Remove the top to the master cylinder reservoir and suck out as much of the old squid ink as you can. Clean any sediment out of the reservoir with a clean, lint-free rag. Do not spill any brake fluid on any painted surfaces — it will remove the paint pretty much immediately.

Get a piece of clear plastic tubing (aquarium tubing is fine, and it’s cheap). Push one end of the tube over the brake bleeder bolt at the right rear of the car. Put the other end of the tube into a small, clear bottle with an inch or two of clean brake fluid in it. (This will keep air from being sucked back into the brake cylinder or caliper.) Put a piece of 1 x 4 lumber or some other spacer under the pedal to prevent the pedal from traveling too far when line pressure is released. Top off the master cylinder reservoir with fresh fluid and put the cover back on the reservoir. Fluid will squirt out of an open reservoir every time the pedal is released.

Your helper needs to be someone who can follow instructions exactly. He or she won’t get dirty hands so you don’t need to pull one of your pals away from the ballgame. A teenager in a white dress will do fine. Have your helper sit in the driver’s seat and await your orders. Here’s the drill: You say “down.” He or she depresses the brake pedal with about the same amount of force needed to keep the car from rolling forward at a traffic light. Then your helper says “down” and keeps the pressure on. When you hear the call, warn your helper that the brake pedal is about to sink underfoot and to keep the pressure on constantly. Then crack the bleeder bolt a quarter-turn. 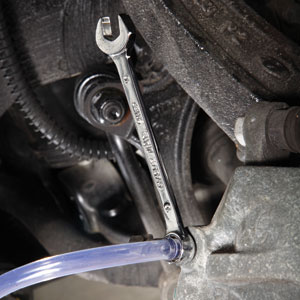 A bleeder bolt can become difficult to remove. Use a proper-fitting box wrench to keep from rounding it off. 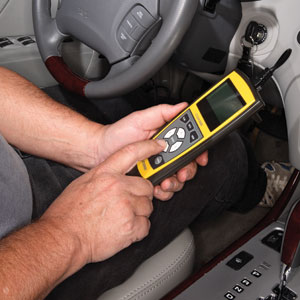 Got ABS? You may need to use a scan tool during the bleeding process to cycle the pump and valves.

Some of the old, contaminated fluid will trickle down the tubing into your bottle. When the trickle stops, close the bleeder. Then you say “up.” Your helper says “up,” and removes his or her foot from the pedal.

Repeat this process until fresh, clear fluid comes from the bleeder. Any out-of-sequence moves can suck air into the caliper. Yes, the end of the tubing is submerged in fluid, but air can travel past the threads on the bleeder bolt into the caliper if there’s ever any negative pressure in the system while the bleeder is cracked.

Every half-dozen or so iterations, top off the reservoir with fresh fluid. Do not allow the reservoir to get more than half empty — air can be sucked into the master cylinder unless the fluid level remains well above the bottom of the reservoir that feeds the cylinder.

Once clean fluid is coming out of the brake, snug the bleeder bolt and move your operation to the left rear wheel and start all over again. Next repeat the process with the right front and finally with the left front. Follow that with a few strokes of fresh fluid from all four, again. Don’t forget to keep the reservoir topped off.

For an older vehicle without an antilock braking system, this process will do a great job even if you have air in the system, say, after replacing a caliper or master cylinder. For advice on bleeding ABS, you’ll need to consult your service manual. There may be a bleeder bolt right on the ABS controller, or you may need to beg, borrow or steal an ABS-capable scan tool.