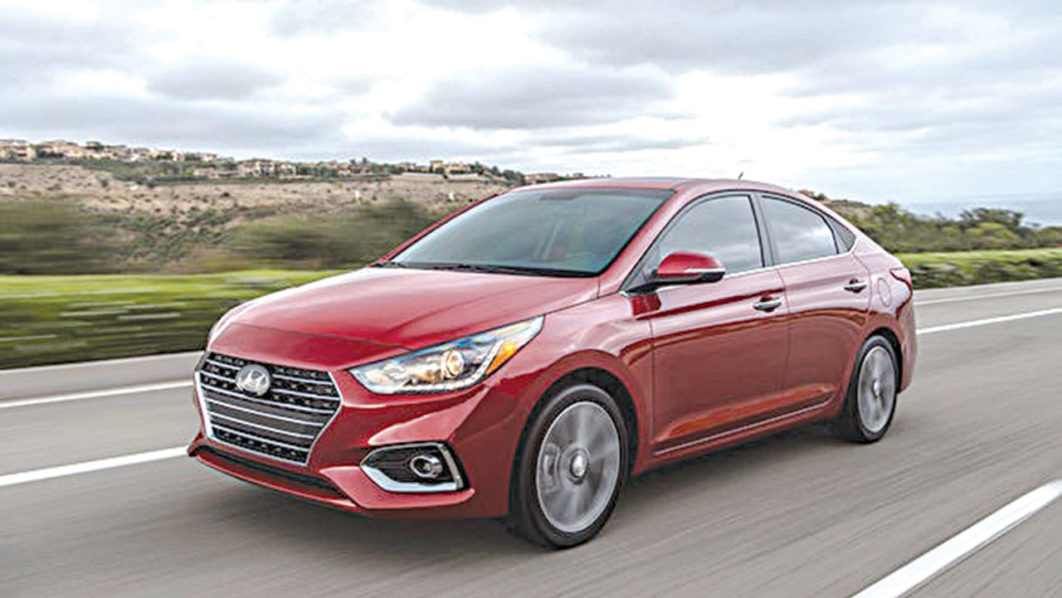 Hyundai has unveiled the U.S.-spec 2018 Accent at the 2017 Orange County auto show. The car comes packed with many new convenience features.Among the features are conservative interior design with touchscreen as the centerpiece of the dash and a mix of buttons and knobs for the audio and climate controls.

Some of the key tech features include a standard 5.0-inch screen on base models or a 7.0-inch touchscreen on the midgrade SEL and Limited grades. Apple CarPlay and Android Auto are standard on the highest trims along with a small multi-information display in-between the gauges.

The 2018 Accent will also be available with forward collision warning and automatic emergency braking on some models. Certain trims of the 2018 Accent will be compatible with Hyundai’s BlueLink telematics service that allows for remote start via the BlueLink app or Amazon Alexa through Google Home or Amazon Echo devices.
Compared to the car it replaces, the 2018 Hyundai Accent in 0.6 inch longer, 1.2 inches wider, and rides on a wheelbase that’s 0.4 inch longer.

The car’s new platform is made out of 54.5 percent high-strength steel, which is 13 per cent more than its predecessor, resulting in a 32 per cent improvement in torsional rigidity in the new model.

Hyundai says it has also improved the 2018 Accent’s driving dynamics, crash performance, and noise reduction, thanks to the extensive use of high-strength steel. Under the hood of the 2018 Accent is a revised 1.6-liter I-4 with an estimated output of 130 hp and 119 lb-ft of torque, which is slightly lower than the old car. Hyundai says that it has retuned the engine for better drivability and a better powerband by improving low-end torque.

A six-speed manual transmission is standard, and a six-speed automatic is optional. Fuel economy is up by seven per cent, thanks to engine revisions such as new low-friction piston rings, a variable fuel pressure module, and an upgraded software engine software control module.

The optional six-speed automatic has also been improved, and weight is 4 pounds lighter than the old unit. A drive mode selector that enables drivers to switch between Normal and Sport modes comes standard on automatic-equipped Accents.
The 2018 Hyundai Accent is only available as a sedan in the U.S. market; the hatchback is now exclusively for the Canadian market.