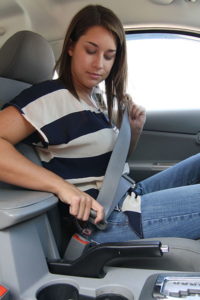 A seat belt (also known as a seatbelt or safety belt) is a vehicle safety device designed to secure the occupant of a vehicle against harmful movement that may result during a collision or a sudden stop. A seat belt functions to reduce the likelihood of death or serious injury in a traffic collision by reducing the force of secondary impacts with interior strike hazards, by keeping occupants positioned correctly for maximum effectiveness of the airbag (if equipped) and by preventing occupants being ejected from the vehicle in a crash or if the vehicle rolls over.

An analysis conducted in the United States in 1984 compared a variety of seat belt types alone and in combination with air bags. The range of fatality reduction for front seat passengers was broad, from 20% to 55%, as was the range of major injury, from 25% to 60%. More recently, the Centers for Disease Control and Prevention has summarized this data by stating “seat belts reduce serious crash-related injuries and deaths by about half.” Most seatbelt malfunctions are as a result of there being too much slack in the seatbelt at the time of the accident.