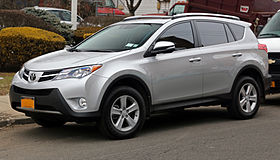 JAPANESE car manufacturer Toyota is going to recall almost three million of its cars worldwide after a potential weakness was discovered concerning the vehicle’s seatbelts. The recall applies to RAV4 SUV models produced between July 2005 and August 2014. There are 48,616 vehicles affected in the United Kingdom (UK).The model – the RAV4 SUV – is being recalled due to a possible seatbelt problem.

While investigating a fatal crash in Canada in 2011, Canada’s transport ministry discovered that in a severe front-impact crash, the rear seatbelts could possibly be severed by metal parts of the seat frames.
According to Reuters, Toyota is aware of these findings, “while adding that it had not been able to confirm a connection with injuries or fatalities”.

Toyota RAV4 SUV owners in the UK will be contacted by Toyota by post or phone if their vehicle is affected.
It is not clear whether users of the product in Nigeria are affected as Toyota (Nigeria) Limited (TNL) is yet to make official statement regarding the recall. In UK, owners will visit their local Toyota centre by appointment, where work will be undertaken to rectify the issue. Toyota will be adding resin covers to the metal seat cushion frame to counteract the problem at no cost to the customer. Toyota estimates that the work will take between 30 and 60 minutes to complete.

The recall will affect nearly three million vehicles globally: 1.3 million in the USA, 624,642 in Europe and 918,000 in the rest of the world. If owners require additional information they can contact their local Toyota Centre or the recall helpline on 0800 876 6750.