What to Do When Your Hybrid Car’s Battery Dies

Finding yourself on the side of the road with a car that’s out of gas or out of juice has always been frustrating. But with conventional vehicles, the fix has traditionally been simple: If the battery dies, get a jump (and recharge it later), and if you run out of gas, get more by any means necessary, at which point the car should start right back up. 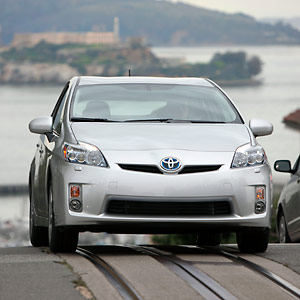 But what about hybrid cars? The complexity of today’s electronically optimized auto drivelines—especially those with hybrid gasoline and electric power—means that a field repair is now nostalgic. Owning a hybrid means that dealing with a dead battery or empty fuel tank gets much more complicated.

You might think that a hybrid vehicle’s electric motor would be a godsend if you ran out of gas; it could provide enough power to get you to a gas station. But Chevrolet’s Tahoe and Silverado hybrids, for example, completely shut down if they run out of gas. There’s no coasting—and no limping to a gas station on the battery, even if the main battery is fully charged. We know: We tried it in our test Tahoe on a neighborhood driving loop, while we were equipped with spare fuel. GM’s official word is that driving its big “two-mode” hybrid trucks without gas leaves the large propulsion battery vulnerable to damage, so it protects the expensive (estimated at more than $5000) battery shutting down the vehicle. GM is not the only one with this strategy: Nissan also shuts down its hybrid Altima if it runs out of gas.

By contrast, Toyota’s Prius, as well as the similar Lexus CT200h and Lexus HS 250h sedans, will indeed run on battery power even if they run out of gas, but not for long. How far they can go when the gas is gone depends on how much of charge is in their batteries and how gingerly you drive. With a strong charge prior to the gas tank hitting empty, some owners have reported being able to drive up to 2 miles without gasoline.

However—and this is important—the Prius won’t let you drive the main battery down to absolutely no charge. When the battery becomes discharged to a certain point, the car is programmed to fire up the gasoline engine, which normally would recharge the battery as it propels the car. If you’re out of gas, though, the Prius will try (and fail) three times to start the engine, and then it will go totally dead. Once this happens, a fault code must be reset in the car’s engine computer before it can be started again. So even if you put gas in the tank, the car would need a technician to reset the code before you’re on your way.

There’s another worry about running your Prius out of both gas and juice: towing it. Since there is no conventional neutral in the transmission, pushing a dead Prius will be more difficult because the electric motor/generator system is also being turned. That leads to a bit of a problem in some hybrids: If they are flat-towed by a tow strap, they could generate electricity that could overheat the motor/generator. Toyota says its Prius, and other hybrids, will not generate electricity unless they’ve been turned on, which requires a charged 12-volt battery. Remember, the Toyota system has two batteries: a conventional 12-volt battery used only to start the system, and the main NiMH (nickel metal hydride) battery. If that 12-volt battery is dead, the Prius won’t start, even if the main battery is fully charged. Fortunately, even though the 12-volt batteries in the Toyota and Lexus hybrids are located in the rear of the cars, there are posts in the engine compartment that allow you to “jump” the battery if it’s dead.

The worst consequence of a tapped-out Prius would be if the depleted nickel-metal-hydride propulsion battery sinks too low in its charge that the engine and motor/generator cannot charge it. In this case, the battery would have to be charged by a Frankenstein machine that exists only at Toyota dealers. Toyota says that no dealers have ever reported needing to use the machine since the Prius’s 2001 introduction in the U.S. Still, you don’t want to be the first.

PM got the chance to put all this to the test when we drove a Lexus HS 250h hybrid, which has a similar driveline to the Prius (although with a 2.4-liter gasoline engine similar to a Camry’s rather than the Prius’ 1.8-liter), until it ran out of gas. We did this on a non-highway loop, driving just quickly enough to keep the main battery fully charged, but not so quickly that we used battery power to augment acceleration. When the trip computer alerted us that our distance until empty was zero miles, we kept driving. And driving. Two hours and about 55 miles later, the HS 250h finally ran out of gas. At first it wasn’t noticeable, except that the car was quieter running in electric mode. However, after only half a mile on electric-only, the car became significantly slower, and wouldn’t accelerate beyond 15 mph. We were lucky we didn’t deplete the propulsion battery too much or it would have activated the three-start cycle and then required the fault code reset. But since we didn’t, we could dump our jerry-can of fuel into the tank and be on our way.

The big problem is that the remaining-range gauge in these cars is not always accurate; some Prius owners have reported that they can drive up to 100 miles after the low fuel light comes on. Trip computers that display cruising range cannot tell the future should driving conditions and fuel economy change. Frankly, though, the range of the newly enlarged, quicker and more efficient gasoline-powered Prius should keep you out of range-limit emergencies. With the latest Prius’s 11.9-gallon fuel tank and 50-mpg combined fuel economy rating, its range is nearly 600 miles. That’s equivalent to diesel-car range, and well beyond many gasoline-powered light-duty vehicles.

Not all hybrids have a system as complicated as Toyota’s. Kia’s Optima Hybrid is designed to run without the electric drive system being very noticeable to the driver. So like the GM and Nissan hybrids, it will stop if it runs dry of gasoline. But, on the plus side, you don’t need any code to restart the Kia (which also uses a belt-driven combination alternator/starter). Once you’re refueled with gas, you can restart the car by jumping the car’s 12-volt battery.

Ford hybrids use an “EV only” mode, which means that its hybrids can be driven short distances should they run out of fuel. However, the company has also brainstormed what might happen if a customer drives too far and depletes the propulsion battery: On early Escape hybrids, the battery compartment contained a “bump start” electronic module that could actually siphon electrons from the 12-volt battery used to start the car, or a parallel 12-volt battery attached by jumper cables to a running car, and charge up the main 330-volt drive battery enough to start the gasoline engine. Ford, however, found that there has never been a case of the main battery depleting itself so far that it couldn’t fire up the gasoline engine, even after freezing the vehicle for two days at minus 30 C in Alaska, and so it removed the module on newer hybrids, battery engineer Pat Maguire says.

So running a hybrid out of gas doesn’t necessarily mean you can drive it on battery power alone, and killing the battery in a hybrid may or may not mean a lengthy charge time at a dealer. It all depends on which hybrid you own. No matter which one you’re driving, though, reviving it when it’s dead is seldom as simple as finding some gas, pouring it in the tank and turning the key. Perhaps, then, a bit of range anxiety isn’t a bad thing.