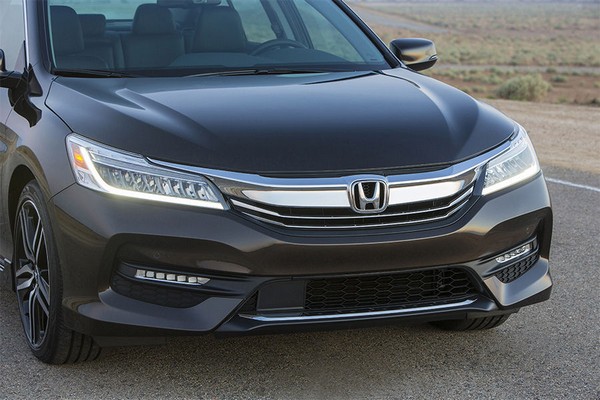 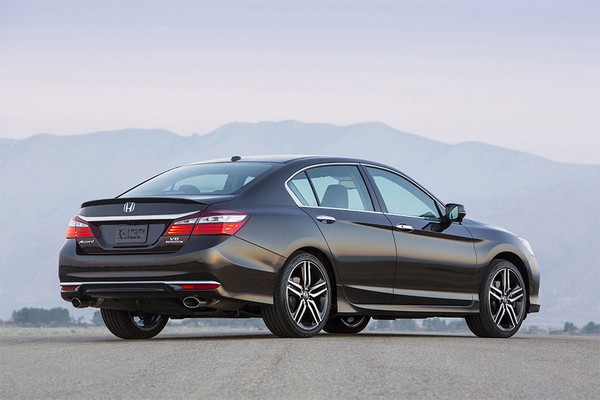 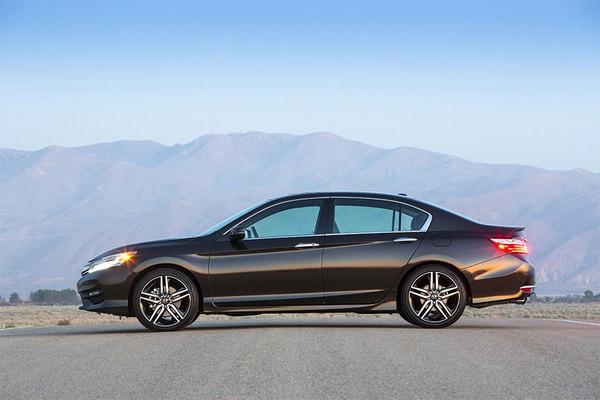 The refreshed 2016 Honda Accord has big shoes to fill—its own. After all, the Accord has landed on our list 29 times, and it has remained one of America’s favorite family shuttles in terms of annual sales. Even as the market migrates to crossovers, the Accord remains hugely important to Honda. So for 2016, Honda has added some new ingredients to its winning recipe. And we just got our first taste of the new dish.

The spate of improvements goes beyond the typical fascia revisions and new lights, although those are present and give the 2016 model a spiffier look. Also included in the makeover are revisions to the base four-cylinder’s CVT, structural reinforcements, and suspension changes that are supposed to sharpen the handling. We split our time between the model enthusiasts will like most, the Accord Sport with the six-speed manual, and another that’s more popular among mainstream buyers, the Accord EX-L, now with Apple CarPlay and Android Auto.
Happily, the Accord Sport remains a dynamic delight—we loved the 2013 Accord Sport —especially with the sublime manual transmission, which gets a new ball-type shift knob and still boasts slick action and a near-perfect clutch. The Sport and Touring models ride on sexy, new five-spoke 19-inch wheels wrapped by 235/40R-19 tires, which combine with chassis changes made across the 2016 Accord sedan range (high-performance dampers, the aforementioned bracing, and tweaks to the electric steering) to make it feel even more visceral than its predecessor. The 189-hp 2.4-liter four-banger also sounds great—partially on account of active sound amplification—as it revs to its 6800-rpm redline.

A low-profile decklid spoiler, dual exhaust tips, and side-sill extensions help the Sport model look the part, too, especially in the newly available San Marino Red that can’t be had on other models. Inside, carbon-fiber­­-esque trim adds a dose of intensity to the squared-off interior architecture without looking cheesy or cheap, although many of the cabin’s lower interior panels unfortunately remain hard, shiny plastic. 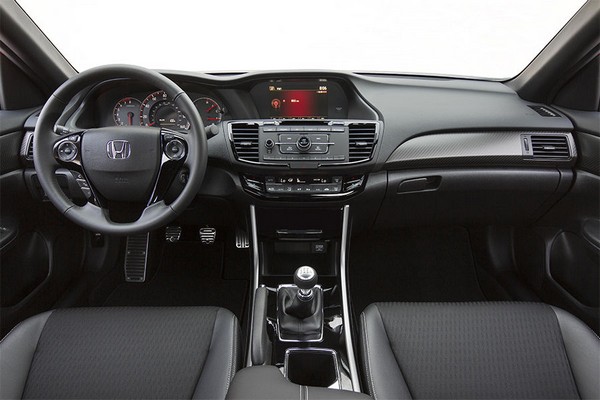 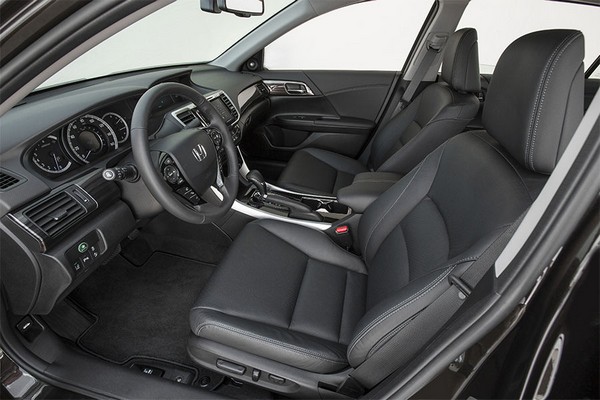 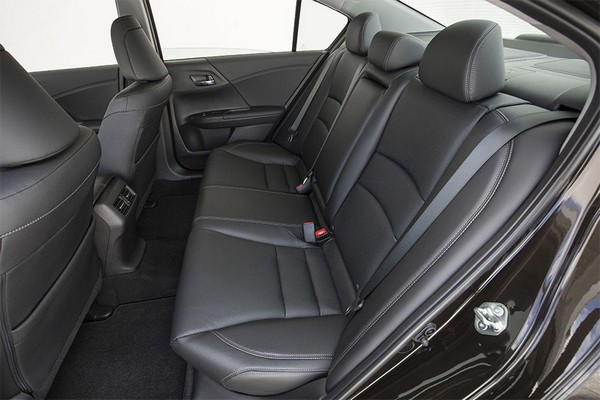 One for Most Everyone Else

The EX-L model we tested came equipped with a 185-hp version of the same 2.4-liter four that pipes up (via the sound enhancement) when the gas pedal is depressed with any intensity. Want to know what else happens when you step on it? It actually moves—yes, even with the CVT, which was reworked to deliver power in a more linear fashion. The CVT even has a responsive “Sport” mode, although it lacks manual ratio selection. Sport mode summons passing power with less hesitation and it finds the engine’s rpm sweet spot with more authority, all the while actuating pseudo shifts that do a pretty convincing impression of a conventional automatic transmission. Meanwhile, the ride is luxury-car supple with the EX-L’s 17-inch wheels, although a good measure of steering sharpness goes away as part of the deal—especially at high speeds, where we noticed a fair bit of play just off-center. Overall, however, the Accord feels as solid and quiet as ever.

The EX-L also receives minor interior changes, and Honda is very proud to have entered this millennium by adding 60/40-split folding rear seats (on Sport models and higher). A bigger change, however, involves the integrationof Apple CarPlay and Android Auto into the button-less, knob-less, screen-based Display Audio system, which incidentally still doesn’t win many friends here, with its fingerprint-collecting screen that washes out completely when the sun hits it at certain angles.

ALSO READ  The 10 Best Engines of The Last 20 Years

The only functionality of the system we sampled was Apple CarPlay; so far we can conclude that if you’ve made friends with Siri and speak with simple verbiage and clear diction that Apple devices can easily understand—and are content being able to use only a small number of apps (music, maps, text dictation) compatible with CarPlay—you’ll probably get along fine with the system. You also had better be comfortable having your text messages read aloud for the whole car to hear if you want to receive any while the car is in motion.

But CarPlay has minor annoyances, too. For example, when a passenger used the paired phone to activate the trusty Waze app for navigation rather than use the iPhone’s embedded Apple Maps app (which is still less than reliable in Los Angeles), the Music app retaliated by hijacking the audio system and limiting audio choices to the selection of music on the phone. Alternatively, you can skip CarPlay and use a second USB port under the armrest that allows for charging, and the phone can always be connected through Bluetooth—you know, old-school style. As soon as one of our Android-toting editors gets behind the wheel, we’ll be able to deliver an evaluation of Android Auto, but our admittedly limited exposure on this day says that CarPlay is a work in progress.

We have yet to drive a 2016 Accord sedan with the optional 278-hp 3.5-liter V-6, although we wouldn’t be going too far out on a limb to surmise that the 2016 model’s refinements will render it generally as sweet as the four-pots, except with about 50 percent more horsepower and lower fuel economy. Consider the Accord’s shoes as nicely filled as ever.